This site is a reserved place for a proposed coming site in English with the purpose of making the EU and its decision procedures as transparent as possible. It already exists in Swedish. The central part of this site is a readable presentation of the text that rules much of the life of half a billion Europeans today, the EU treaties. This is where the ruling political principles, a description of the law making procedures and the prescribed and forbidden legislations can be found. Unfortunately, this text is very little known today, and also difficult to read or neglected in existing official presentations on the workings of the EU. In this proposed version there will be a complete compilation with advanced search functions, an immediate display of referred articles, a menu with all the chapter headings etc. There are also a lot of other features in the existing Swedish version that can be included, such as a clickable map showing the whole procedure from treaty to national implementation.

The idea is also to promote a knowledge based discussion om the future of Europe, a future that very much is determined by the writings in the common treaties.

We need support, partners, sponsors who care for European democracy and want to promote the English presentation, to appear here. If you want to get involved, know an institution or organisation that might be interested to host it or just ask or tell something, contact

To add to the discussion on the future, here is an alternative idea for European cooperation, where the national parliaments are focused, and the EU institutions get different tasks. Consider it a vision for a new direction, (yes, as a whole unrealistic today, but incremetal steps can be taken, see furter down) This basic idea can also be used for a reform of the UN.

What can be done with the EU? The beautiful idea of bringing the peoples closer together has to some extent resulted in the opposite, as the economic and immigration crises create conflicts on all levels, including Brexit, while parties less interested in international cooperation grow in influence and some nations are being warned for not adhering to EU values. The debate on the future seems to restrict itself to more or less of the existing EU, a stucture grounded in the nineteen fifties. Are there any other future options?

I believe there are possibilities that can combine a decentralisation of decision making with a good chance of bringing people closer to each other. For that we have to effectively decentralise the debate, we have to find a mode of international cooperation that doesn’t rely on leaders compromising behind closed doors and then having to impose decisions on their peoples, without formal possibilities to reject them.

Trying to hide within their national bubbles is no longer an option today, however. Over and above the much hyped international trade, ordinary people are coming together on the internet regardless of national borders, and finding new perspectives more easily than ever before. The national parliaments, on the other hand, are stuck in old ways and old perspectives, and are losing their authority as the media report the same old debates going on, debates that become even stranger when they are about implementing EU directives that haven't been the subject of national debates. No wonder we see traditional parties losing ground all over Europe, accompanied by the surge of new nationalist groups.

One solution that would amount to a radically different direction would be to truly internationalise the national parliaments, at the same time giving them back the decision-making power. This would mean permitting representatives from national parliaments to put proposals to all the other national parliaments and have their delegates taking part in the actual debates on them, including giving presentations to national steering committees. The proposals would have to go through the EU parliament to receive a majority there first. This would also apply to proposals from the EU parliamentarians themselves or from the national ministers. In this way the EU sytem would lose its power to dictate over the heads of the national parliaments and peoples, but instead would be given the right to initiate national debates in all member countries and participate in them. It can be expected that the national media coverage of international topics would improve, and the peoples become more familiar with the perspectives of each others cultures and nations. Authoritarian and inward-looking tendencies will thus be confronted by other perspectives in their own national forums.

Outline of an inter-parliamentary structure

This is a "clean" decentralized, neutrally worded version of such a system, that can be implemented on international level, as a reform of the EU but also a direction for development of other continental political bodies and even the UN system. The EU bodies will get another kind of power, rather than simply losing their present competences, and the UN structure would be significantly more efficient this way. For the EU, it would work like this: 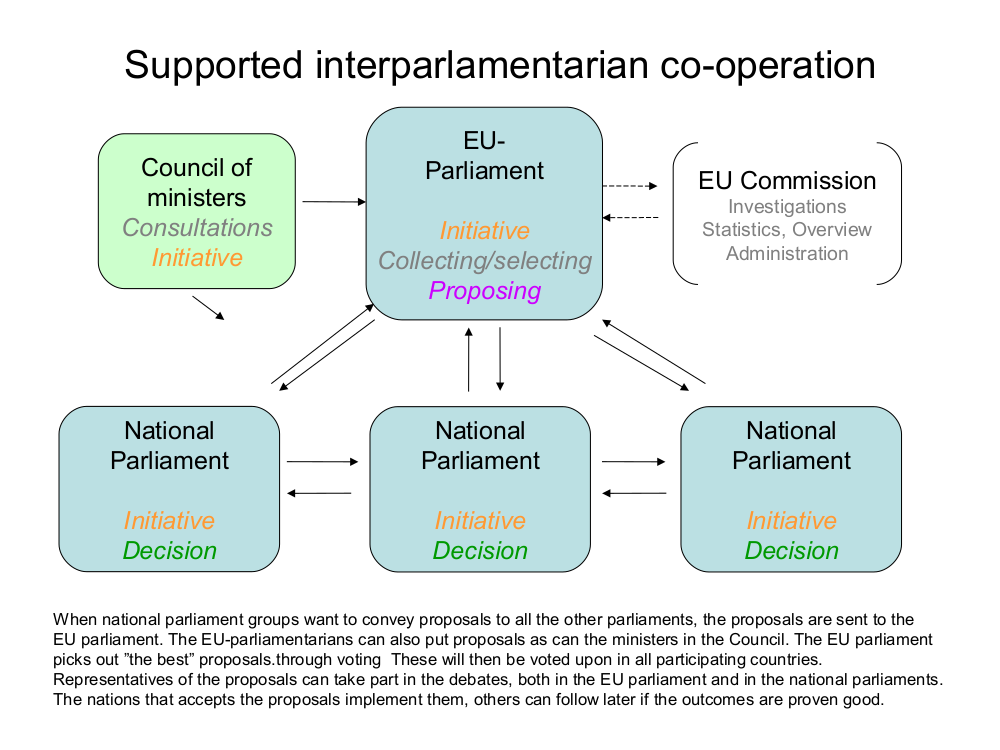 The proposals would be collated in the International Parliament, which would vote on which proposals would be mandatory to be debated and decided upon in all national member parliaments. National parliamentarians will be empowered to appear before the IP to present the proposals they have submitted. The IP will be elected by the citizens of the participating nations, as the present EU parliament.

Thus, all national parliaments would be obliged to debate and decide upon the proposals from the IP. Those who approve of a particular proposal would adopt it, whereas those that do not can reject it. If the implementation is successful in some countries, the others may voluntarily join later. This can be seen as a version of "EU at different speeds" where the goal is not predecided.

A crucial factor in this idea is that representatives and adherents of approved proposals themselves can visit national parliaments and participate physically or virtually in the debate and argue for their proposals there, including in preparatory committees. A parliamentarian from any member country could for example appear in the IP and promote a proposal, and if it is accepted, later participate in the debate on it in a few parliaments, sharing the task with others who supported the proposal. International parliamentarians or ministers from other countries could do the same.

There will be need for an international agency to prepare and administrate incoming proposals, providing backgrounds for the decision process. This envisaged body could also support joint projects, organising seminars and promoting exchanges and collaborations of various kinds, in a similar way to how international administrations function today. For the EU, the Commission in this role, losing its formal monopoly to initiate legislation, will still be able to use its overview and knowledge for significant influence, presumably merging with the administration of the EU parliament. As a result, fewer negotiations, greater creativity and less time dealing with the big-time lobbyists can be expected.

Meeting(s) of leaders (the Council and the European Council, that can merge) where they have the opportunity to exchange good ideas with each other, ideas that they can bring home to all the consenting colleagues. They can also bring proposals to the International Parliament (EP) if they want them to be tested there for dissemination to all member countries. They wouldn't have to compromise in order to get things done, but the preparatory bodies would still be able to work out common proposals. Governments putting proposals before parliaments is not an unfamiliar thing. v

An international court (read the ECJ for the EU) will oversee that the system works as intended, including implementing some kind of disincentive not to follow the principles and procedures. Some rules of human rights and democracy like the EU Charter may be on their table.

A citizens initiative will be established, on EU level and potentially global, for making proposals to the IP, requiring a reasonable support from a number of people in a number of countries to be valid. It can contain any topics and will be treated as any proposal from politicians.

As a possible extra feature: On the international level, a formal transparent role for civil society organizations and lobbyists could be put in place. Their accountability will be put to national votes together with the election of representatives for the IP, and they will be allowed to take part in for them relevant debates, without voting rights, if they have gathered enough support through national votes. This results in transparency, of both corporate lobbyists and of the NGO:s.

A reasonable precondition is that a certain number of parliamentarians would have to lend their support for the international proposals, from one or from a number of parliaments. Another possibility is that a number of nations (maybe all) may delegate final decision power to the international parliament. This could be implemented as a full delegation on certain topics, or a possibility to have the IP proposals adapted with a substantial minority nationally. Such delegations should require renewal after some years and be withdrawn when related problems are solved.

In this proposal, the national parliaments will regain their full decision powers at the cost of having to hear international voices in their debates and meet their arguments. New powers for them will be to make proposals that can be put before all other participating parliaments, if they pass the IP, something that can be expected to be of interest to national minorities. Debates will be less predictable and more interesting to the general public. Reluctant governments can be expected to prefer joining this system rather than being left outside. Such a system, and steps towards it, will probably bring the peoples of the different countries closer to each other, and an originally stated intention of EU will come closer to being a reality! Embryos already exist as COSAC in the EU and IPU globally.

A full implementation of the above stucture is rather utopian today. It is however possible to take several different steps in the direction of the structure. Such steps have to include something with a good side for all involved parties, to happen in an orderly way.

One basic idea is to change the relation between the national and the international decision bodies. Today the EU-system and the national parliaments have an anomymous relation of international decision and compulsory implementation nationally. This proposes a more transparent and close relation based on common debate between the levels with an open outcome. A step would be to let that national parliaments vote freely for or agaist a directive, if they allow EU-parlamentarians to take part in the national process with talking rights. It could be tested on some limited topics. This could work if members of the EU-parliament could appreciate to test their views in a new setting, be more visible to national opinions and influence and learn about the national positions. Possibly it would also take allowing the EU-parliament the right to initiative, which is has wanted for some time, to compensate them.

The other basic idea is about an extended interparliamentarian co-operation. This can also be implemented stepwise. Today there is such cooperation, called Cosac, that is without any formal power and a site IPEX that is a platform for EU parliamentary exchange. These could be upgraded to be forums for better handling of the ”yellow card” that also could be more powerful, allowing a number of parliaments to avoid an unwanted legislation.